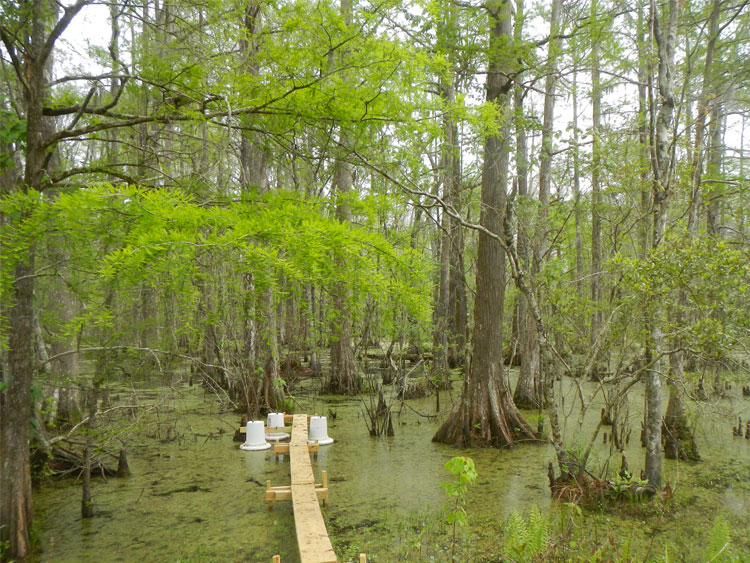 The term ‘carbon sequestration’ refers to the removal of carbon dioxide (CO2) from the atmosphere, usually by plants, and the permanent storage of the carbon in the ecosystem. Wetlands located along the coast of Louisiana have the potential to permanently bury carbon due to high regional geological subsidence. For a variety of financial, environmental, and political reasons, there is substantial interest in quantifying carbon sequestered by terrestrial landscapes, including wetland ecosystems. In the future, the ability to sell carbon credits may provide an important source of revenue for wetland restoration.

Comite Resources has quantified carbon sinks and sources at the Luling assimilation wetlands (Lane et al. 2017; see also Assimilation Wetlands). With Tierra Resources, the team measured carbon sequestered by trees and soils and emitted as greenhouse gases. We found that the net difference between the Project and Baseline emissions was 11,617 mt CO2e/y (metric tons of CO2 equivalents) if greenhouse gases were omitted and 49,505 mt CO2e/y if greenhouse gases were included. This study demonstrated the potential of using forested wetlands receiving treated municipal effluent for the net sequestration of carbon.

In a novel carbon sequestration study with Tierra Resources, scientists with Comite Resources quantified the emissions of carbon during wetland loss (Lane et al. 2016). In this study, several 4 m² plots were established in fresh, brackish and saltwater wetlands, the vegetation was killed using RoundUp©, and the resulting emissions were measured over the subsequent year and a half. This study was the first of its kind to quantify greenhouse gas emissions during wetland loss in Louisiana, which is particularly relevant since the Louisiana coast is rapidly deteriorating. Results of this study justify the inclusion of greenhouse gases not emitted during wetland loss due to the successful implementation of wetland restoration.

Comite Resources and Tierra Resources are also studying the use of mangrove plantings for sequestering carbon and increasing soil strength in coastal wetlands. Comite Resources planted over 6000 mangroves at 10 plots along the coast to assess their potential for coastal restoration. Results were mixed, but the potential for coastal restoration using a modified technique has been developed and is currently being tested (Tierra Resources).