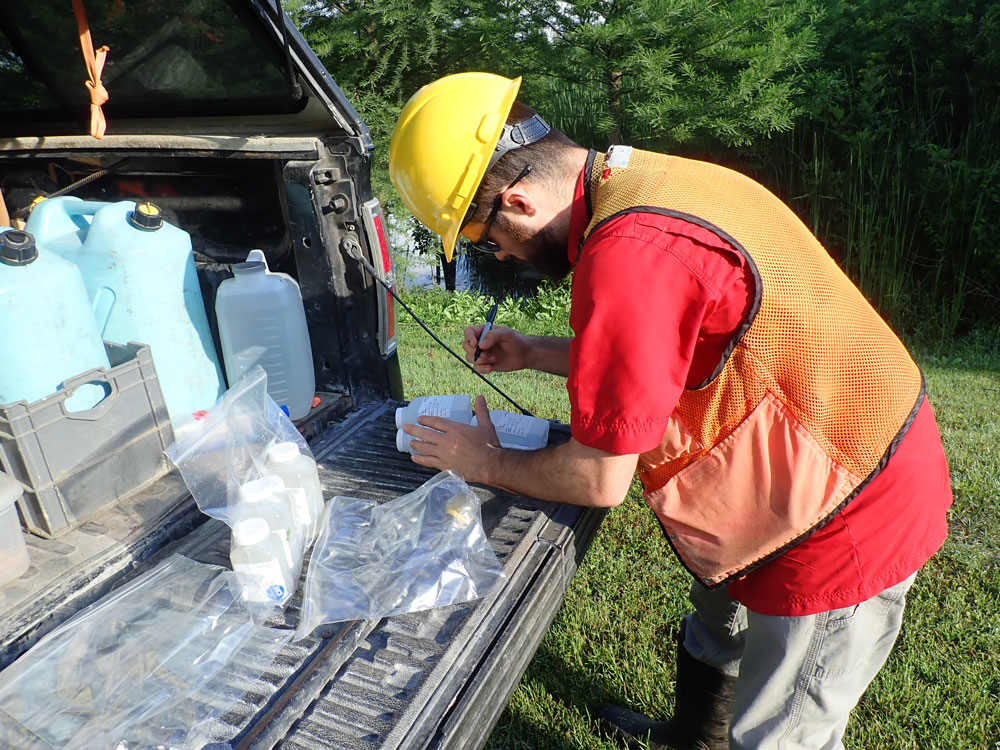 Comite Resources designed two stormwater wetlands directly north and south of CHS, Inc. bulk grain transfer terminal, which handles both grain and grain by-products. The facility transfers grain from barges to ocean going vessels and services about 2 to 3 ships per day. Because of the high volume of grain handled by the facility, grain dust and spilled grain is deposited on the site and washed into the stormwater system. To address this problem, CHS partnered with Comite Resources to construct two wetlands totaling 2.5 acres to reduce total organic carbon (TOC) from stormwater runoff. Herbaceous species were planted and also colonized the area naturally, and baldcypress seedlings were planted at a density of 200 per acre, for a total of 500 trees. Hillman et al. (2018) reported a mean diameter growth increase of 2.5 cm/yr for these seedlings, which is very high. The use of wetlands to remove pollutants from stormwater runoff has great potential as a cost- and energy efficient method of improving water quality while also providing habitat for wildlife (see Stormwater Wetlands). The CHS stormwater wetlands have many species of birds living in the wetlands along with alligators, fish and frogs. Comite Resources visits CHS stormwater wetlands quarterly to carry out stormwater wetlands assessment and environmental monitoring to assess TOC reduction efficiency, vegetation growth, and overall health and system performance. Below are monitoring reports from this site describing work carried out and preliminary data. 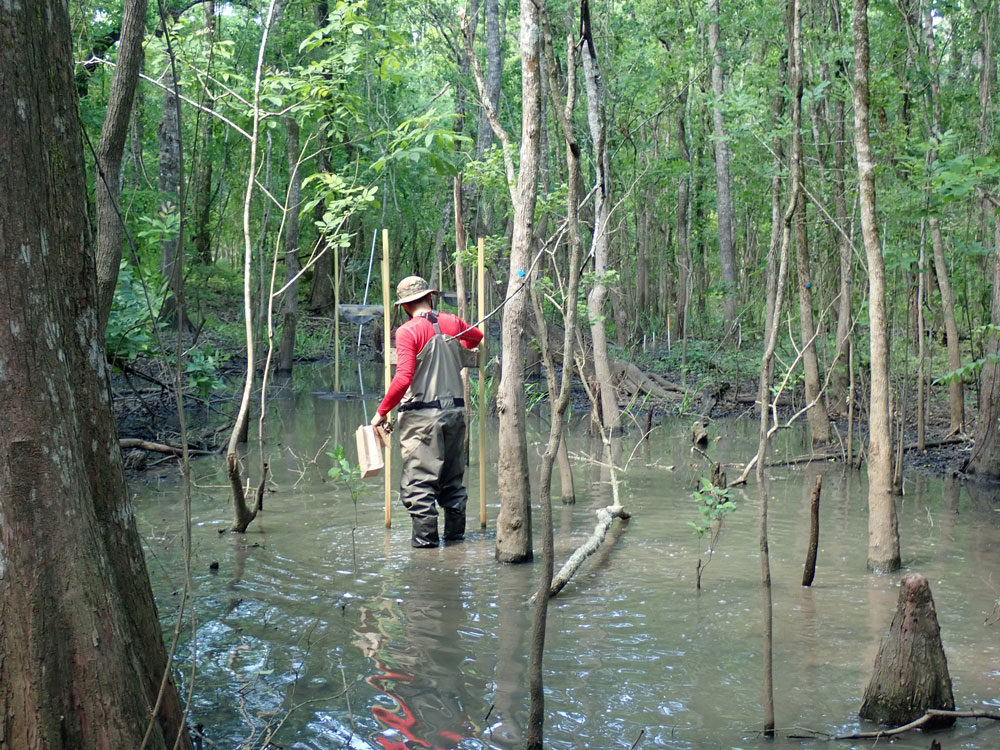 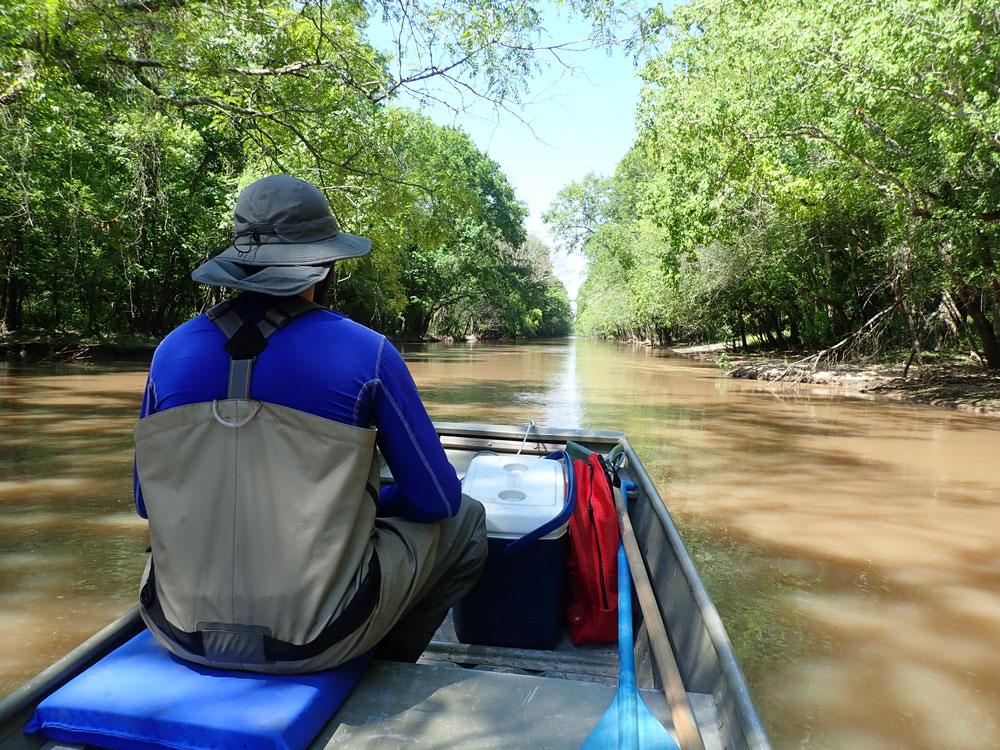 The city of Breaux Bridge began discharging treated effluent into the Cypriere Perdue Swamp starting in 1954 when a city-wide sewage collection system and wastewater treatment plant were constructed.  The city uses a 3-stage oxidation pond and chlorination-dechlorination disinfection system with the capacity to treat 1.27 million-gallons-per-day prior to discharge to the wetlands. The 1470-ha swamp wetlands are dominated by very large baldcypress, water tupelo, and swamp red maple trees, as well as black willow and tallow in some disturbed areas. The wetland is hydrologically bounded to the east, north, and west by natural levees, and drains into Ruth Canal that forms the southern boundary and connects to Bayou Teche and the Vermillion River. Comite Resources has been carrying out wetlands assessment of the site since it was officially permitted in 1997. Monitoring includes measurements of tree growth (dbh & leaf) and productivity, water hydrology, soil accretion, and nutrients and metals concentrations of surface waters, soils and vegetation. These measurements are made at permanent plots located in the forest directly impacted by the effluent (termed the Discharge site), where the surface water exits the assimilation wetland (termed the Out site), and a site in between these two sites (termed the Mid site; Hunter et al. 2018). A nearby Reference site that is not impacted by the effluent is also monitored for comparison. Below are monitoring reports from this site describing work carried out and preliminary data.

The Cypriere Perdue Swamp is a healthy forested wetland that has been assimilating nutrients from treated municipal effluent for nearly six decades with no apparent negative impacts to ecosystem function or water quality. Many forested wetlands in Louisiana are in a degraded condition due to impoundment and subsidence, and outside sources of nutrients are needed to increase productivity, organic matter deposition, and subsequent accretion. Treated effluent can be a valuable source of nutrients and suspended material for degraded wetlands in coastal Louisiana.